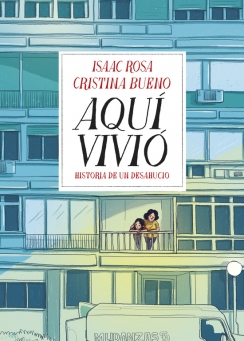 Tender, pointed, and moving, Here Lived is a graphic novel that exposes the problems of eviction, a tragedy that has received the greatest media attention among other social problems since the recession began.

Isaac Rosa, one of the most socially critical and committed writers of his generation, shines a light on the tragedy of an evicted family, from all angles involved: families, banks, justice system or bureaucracy.

Alicia’s parents split and now Alicia, a curious and sharp teenager, lives between her grandmother’s place with her father and her mother’s. One night, an old woman shows up at her mother’s flat, claiming it is her house. She doesn’t break in, but uses a copy of the keys. What does it mean? An abandoned diary confirms the tragedy of a family who was put on the street, who saw their past erased and had to tackle a mountain of bureaucracy, among other problems.

SPAIN – Isaac Rosa (Sevilla, 1974) is a regular columnist for Diario.es and La marea; and formerly for Público, and the satirical magazine El Jueves. He is one of the most socially critical and committed writers of his generation. Here Lived is his first graphic novel.