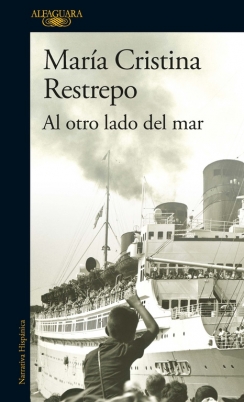 María Cristina Restrepo
On the Other Side of the Sea

On the Other Side of the Sea is the story of Albert and Honorine, a German couple who enjoyed a peaceful life in Cartagena de Indias until they were deported from Colombia because of the fear and distrust generated towards Germans leading up to the Second World War.

In this fascinating and moving tale, María Cristina Restrepo portrays a world at war, a family that has to fight to survive and the unknown reality facing German immigrants in Colombia during these tumultuous times.

COLOMBIA – María Cristina Restrepo was born in Medellín, Colombia in 1949. She has a degree in Philosophy, Literature and Education from the Pontifical Bolivarian University and studied Modern Languages, Art History and Civilization at the International Institute in Rome. She has been a teacher, translator, and the Cultural Director of the library at the Eafit University. She is the author of the essay El olvido en la obra de Marcel Proust (1986), the short story collection La vieja casa de la calle Maracaibo (1989), the novels De una vez y para siempre (2000), Amores sin tregua (2006), La mujer de los sueños rotos (2009), the chronicleEl miedo, crónica de un cáncer (2009), the novel Lo que nunca se sabrá (2010) and Verás huir la calma (2014), a fictionalized biography about Jorge Isaacs.