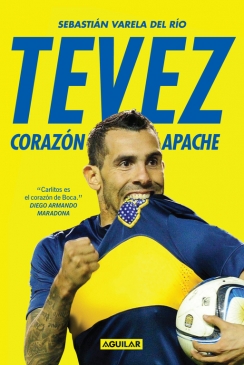 A biography of Carlos Tévez, whose return to Boca Juniors closes a circle in the career of one of the most important strikers in the history of Argentine football. The book portrays his life from two perspectives. Firstly, through his undeniable sport achievements: Tévez is a beloved champion who has played in many World Cups and has an Olympic gold medal.  Secondly, his uncompromising spirit: “The Apache” has reached the pinnacle of success and never lost the magic of the boy from Fuerte Apache. This combination is clearly what has made him such a cherished figure.

Sebastián Varela del Río (Buenos Aires, 1987) has been writing for the sports section of Diario Clarínsince 2007, where he covers daily news of Boca Juniors and the Argentine Selection. He has been a a contributor to the AFP international agency, and a commentator for different publications and radio stations.