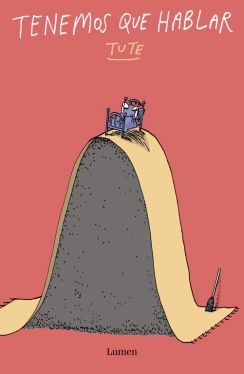 Tute
We Need To Talk

Tute is the torchbearer of a new generation of cartoonists, among the finest in all of Latin America, as was his father, Caloi, before him.   With a sense of humor that’s subtle, intelligent, incisive... but also harsh, Tute depicts falling in love, heartbreak and the relationships in between, with his characteristic sensitivity and simplicity.   It’s surprising the ease with which he makes us smile or laugh about such important yet such ordinary subjects as relationships and love: the fear of being rejected, the monotony, the indecision, the first girl or boyfriend, conformity in couples... With irony and wit, he touches on every stage of love, from childhood to old age.   The brutal honesty between his different characters is the common thread that links all of the mini-stories, which begin and end in a single cartoon frame.

ARGENTINA – Tute is, in real life, Juan Matías Loiseau (Buenos Aires, 1974). He is a regular contributor to the newspaper La Nación and his drawings appear in newspapers all over the world. He was the host of the television series Tutelandia and has put out the CD Tangos nuevos followed by Canciones dibujadas, an album of songs he wrote, interpreted by well-known singers and accompanied by animated music videos.

«I’ll put it this way, without thinking twice: the originality of his ideas, the language of his characters, which flows naturally from erudite to colloquial as needed, and his refined sense of humor make him deserving of the title of Master, already at his young age. […] In my opinion, Tute is the best cartoonist to emerge in recent years.» Quino, creator of Mafalda