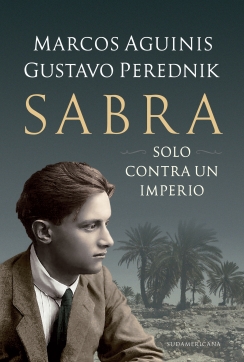 This exciting political thriller combining romantic and political idealism is based on the life of Avshalom Feinberg who disappeared in January 1917. He was a spy in the Jewish Nili ring, which was key to Great Britain’s battles against the Ottoman Empire in Israel and Palestine. In this novel the authors use the thrilling life and mysterious death of this historical figure as a means to take on the subject of what or who Jews are up against and what is the responsibility of a Jewish writer today.

Marcos Aguinis, a Knight of the French Order of Letters and Arts, was the first Latin American to win the Planeta Prize, and was named “Distinguished Author” by the American Unviersity and the Wilson International Center. In Argentina he has won both the National Sociology Prize and the National Literature Prize. Among his bestselling novels are La conspiración de los idiotas and La furia de Evita. His non-fiction includes ¡Pobre patria mía!, a bestseller in Argentina in 2009.

Gustavo Perednik is a Jewish Argentine writer and philosopher; he studied at universities in Argentina, Israel, the United States, France, Peru and Sweden, and currently lives in Israel. He has taught in numerous countries and is author of many articles on Judaism and modernity. He has written fifteen books, many of them award-winning and translated, including La judeofobia and Desde el juicio de Eichmann.