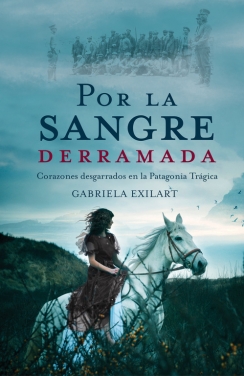 With the backdrop of the workers’ struggles in Patagonia in the 1920s, two romantic stories intertwine. Iorwerth Awstin, a descendant of the first Welsh colonists, has just bought a failing cattle ranch owned by a severe man named Eugenio Montero. There he meets Montero’s granddaughter, Julia, an orphan who is indulged by her grandfather, a wild flower who knows nothing about love. Iorwerth has a dark past and must tackle the violence spreading throughout the region but also stave off Julia’s love. Two passionate, electrifying stories of romantic intrigue are crossed by tragedy, as Patagonia is stained with the blood of laborers killed at the hands of soldiers.

Gabriela Exilart works as an attorney and teaches law at the Universidad Nacional de Mar del Plata. Tormentas del pasado (2012) was recognized by the Senate of the Province of Buenos Aires for its rigorous historical research.