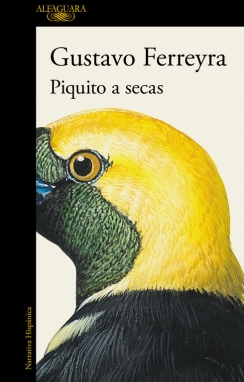 Piquito was a chatty, spoiled child, and he is now a taciturn adult who broods over his disdain and complains about everything and everyone. Rebellious, skeptical, caustic, irritable... and always preparing himself for the worst. That’s Piquito de Oro. He’s in his early thirties, doesn’t work, doesn’t study and has no problem with being supported by Josefina, his 52-year-old wife. Josefina, “a philosopher like Beauvoir but more fleshy and Latina” allows him to live a life of leisure, and he spends his time ranting about everyone and everything. Piquito’s voice, a taciturn, timid adult who was a real chatterbox as a child, is one of the most original in Argentinian literature.

Gustavo Ferreyra is a sociologist and academic. He is a contributor to various magazines, newspapers and academic journals in Argentina, Spain and Mexico, and has published the novels El amparo, Gineceo, Vértice, El directo, Piquito de oro and Dóberman —Winner of the Emecé Prize for Novel.