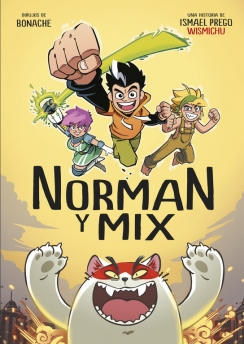 The comic that over 5 million followers have been waiting for is finally here!

Norman and Mix are two very special superheroes... Their powers are super unpredictable!

One morning they wake up with the ability to become invisible (cool!), and the next day everything they touch changes into a different color (ahem...).

Despite their peculiar superpowers, they’ve found a temporary job at an international intelligence agency. But will they be able to complete their first mission successfully?

Wismichu is an online personality created by Galician Ismael Prego. Some amazing numbers back him up as he is one of the most popular YouTubers amongst young people: he has more than 700 million views, 5.7 million subscribers and almost 2 million followers on Twitter and Instagram.

He studied Audiovisual Communication at the Rey Juan Carlos I University in Madrid. In 2012, at the age of 17, he created his YouTube channel doing crazy stuff with his friends in the style of Jackass only to move on to other types of content: comedy, gameplays, flirting advice, etc… always with his recognizable stamp of creativity and originality.