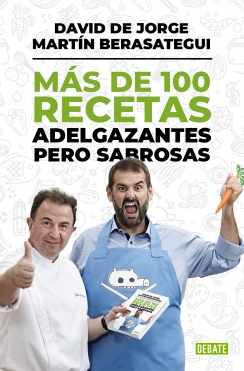 A cookbook to follow a cheerful diet created by two of the big names of Spain’s gastronomic scene: Martin Berasategui the great Basque chef David de Jorge, who has lost 130kg over a year and a half, and to accomplish such a feat, he’s had to change many things, starting with his diet.

David de Jorge is a chef turned publisher. He leads his own TV show, and is the author of A cocinar (2004), Porca memoria (2006), and Con la cocina no se juega.

Martín Berasategui is one of the best chefs of the world. He has seven Michelin stars, and has been awarded with the most important international gastronomy prizes.