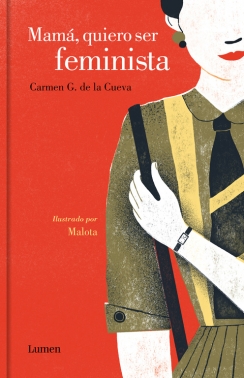 Carmen G. de la Cueva / Malota
Mama, I Want To Be A Feminist

Young women of today feel free, independent, and in control of their own lives and bodies. So why isn’t there more talk of feminism and the need for women to reaffirm their empowerment in the face of society’s paternalism? Perhaps there is more work to be done. This is a testimony that shows how many young women accept social mandates that leave them and their sisters stuck in the background.   Offering images of strong, powerful women, this book tells of the experiences of a thirty-something entrepreneur who has become an active cultural catalyst since creating a literary website called La Tribu de Frida [Frida’s Tribe]. She speaks confidently about herself, her childhood in a town in Andalusia surrounded by a traditional family, about her discoveries—both cultural and personal—that began in her teenage years and led to her awareness of the meaning of the word feminist, which has taken on new connotations in the 21st century. She pays homage to her heroines, who range from Virginia Woolf, Simone de Beauvoir, and Jane Austen to Virginie Despentes and Pippi Longstocking.

SPAIN – Carmen G. de la Cueva (Seville, 1986) holds degrees in Journalism and Comparative Literature at the University of Seville, and has also studied at the University of Braunschweig (Germany), the National Autonomous University in Mexico City, the Spanish Embassy in Prague, and the Cervantes Institute in London. She is a contributor to Ahora Semanal. She heads up La tribu de Frida, a virtual community devoted to literature written by women. She is the founder of La señora Dalloway, a feminist publishing house.