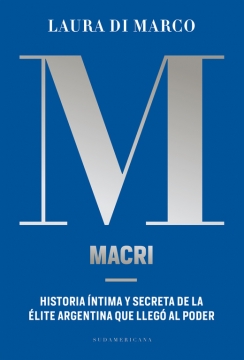 Mauricio Macri up close, like you’ve never seen him before. The first biography of Argentina’s new leader.

Laura Di Marco went looking for the life story of the new Argentinian president and found the story of the Argentinian elite who have gained power. The son of an Italian immigrant who became one of the most powerful businessmen in Argentina, Mauricio Macri was no spoiled child. In fact, the difficult relationship with his father has a lot, if not everything, to do with his political career.

Macri talks about his father’s precarious health, his demanding mother and his landowning family, of his children with a low public profile, his friends from Cardinal Newman College for boys who are now part of his government, about questionable officials such as Arribas and the suicide of his friend Goya, his coach and psychotherapist. His wife, Juliana Awasa, Jaime Durán Barba and Gabriela Michetti also contribute as well as other figures who shape this new Argentinian leader’s biography.

ARGENTINA – Laura Di Marco (Buenos Aires) is a journalist and writer. She studied Sociology at the University of Buenos Aires and, in 1991, won a postgraduate scholarship awarded by the newspaper Clarín, which marked the start of her professional career. She currently writes for the newspaper La Nación, contributes to Radio Mitre’s program Pensándolo bien and is a speaker on aspects of current affairs across academic, business, economic and political forums.
After 20 years in the business, she has written for various publications including Clarín, La Prensa, Noticias, Debate y Poder, amongst others. She is a member of the Argentinian Journalism Forum, a leading professional association when it comes to promoting ethics and quality in their field. She has published the books Las jefas, La Cámpora and Cristina Fernández, la verdadera historia with Sudamericana.