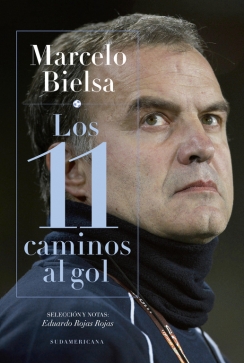 Marcelo Bielsa / Eduardo Rojas Rojas
The 11 Paths of a Goal

After being eliminated from the 2002 and 2006 World Cups, the Chilean soccer selection led by Marcelo Bielsa classified with honours to play in the 2010 South African World Cup. This was a huge event for Chile, but it was not just because of the World Cup classification. Bielsa taught a totally new way of playing and his personality and coaching method made an impact on every part of Chilean society. The Chilean journalist and now sports manager Eduardo Rojas Rojas focuses on the revolution —both in the sport and in society at large— caused by the arrival of the Argentine coach to the Chilean Selection. Through a series of “master classes” given by Bielsa as Technical Director, he reveals in depth his thinking and the tools he employs to face up to almost any challenge. Effort, tolerance, fear, prudence, training, balance, journey, respect and success are some of the most commonly used concepts in Bielsa’s pep talks.

Marcelo Bielsa is a professor of Physical Education, and he coaches soccer as a Technical Director. Among the teams he has led are the National Selections of Argentina and Chile. He is currently the coach of the Olympique de Marseille in the French Ligue 1.

Eduardo Rojas Rojas is a Chilean communication expert who began to work professionally in the soccer world in 1989. He was the world tour coordinator for several national selections and held executive positions in First and Second Division clubs in Mexico and Chile. Since 2009 he has taught courses in Sport Management for the FIFA.