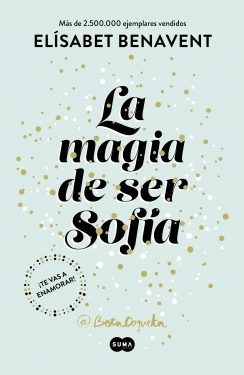 Elísabet Benavent
The Magic of Being Sofía

After five best-selling sagas and over one million copies sold just in Spain, another passionate story comes along   Sofía’s biggest accomplishments of the last few years have been getting her degree in language and literature, starting a postgraduate course in public relations, and breaking up with her boyfriend. She spends her working hours in the Café Alexandria, a peculiar spot where the regulars are a motley bunch.   Héctor is a thirty-two year old guy who’s just returned to Spain after a decade in Geneva. One day he walks into his new neighborhood café, the Café Alexandria, and feels a powerful spark when he meets Sofía. But Héctor is in a long, stable relationship that he’s never questioned. Where does Sofía and all the new emotions she’s awakened in him fit into his life?