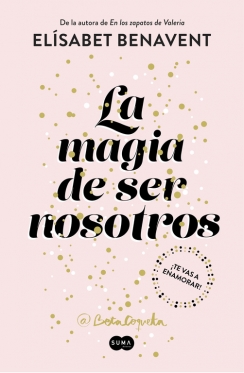 Elísabet Benavent
The Magic of Being Us

Intrigue, boldness, artistry and cleverness characterize this sequel, in which magic transforms into reason that can move the world.

Sofía had thought that everything was clear, even after all that she’d been through with Héctor – as much as they fought. How nice it was to give in to love. They were going to start a life together… but he’d left. And the only thing he left behind him, other than that void, was a note with just an “I’m sorry”. She had stopped being “the other woman”, a fact that once would have pleased her. But now she feels so disillusioned. She does try to keep going… but nothing’s the same anymore.

As for Héctor, he’d flown back to Geneva and straight into the arms of his fiancée but now he was feeling an emptiness that he didn’t expect. He thought after his storm of feelings for Sofía which he didn’t know how to deal with, in Geneva he’d get back his usual sense of calm. But it wasn’t like that. Everything had changed. A phone call with an explanation. An email followed by a thousand rebukes. A letter with all the answers. A photo filled with memories. A text at the crack of dawn. All communication between the two of them stirred up their feelings until they decided to see each other again and say goodbye. For real this time. Forever. There will be no kiss. Only a sincere conversation whilst naked and in a sad embrace. After this encounter she embarks on a trip, maybe she’s looking to forget and start afresh or maybe she’s gathering each and every memory to treasure forever. But it’s a trip which she might not make alone…

Sofía feels like she’s betraying herself when a new future presents itself in her life. But she is also struck dumb when she sees Héctor in the Alexandria after seven months of not talking. Héctor has come back with an apology all ready and an olive branch. Sofía and Héctor will fight to get the magic back, but can they keep the love alive without giving up their dreams?

The Magic of Being Us tackles the challenge of two individuals who are full of blame, but need each other nevertheless, and will do anything to find that place where they can feel truly at home.