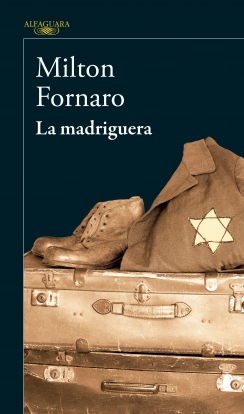 A masterfully written and plotted thriller, set in contemporary Montevideo, at the landmark building Palacio Durazno.   Human remains are found at the Palacio Durazno while spraying for rats, and the media gets wind of it. Detective Arquímedes B. Carson finally gets a case he can sink his teeth into. The investigation will lead him further than he could have ever imagined, back to the Holocaust.   During the Shoah, a young Jew tries to escape his fate at a concentration camp. In his struggle to survive he will discover the darks limits of his soul, becoming a Kapo, a Jewish traitor who works for his captor and subjugates those like him. The consequences of his actions will lead the plot through different settings, and their ramifications will go as far as Buenos Aires and Montevideo.

URUGUAY – Milton Fornaro (Minas, 1957) is the author of one stage play and nine collections of short stories; he was a finalist for the 2009 Planeta–Casa de América Prize for his novel Un señor de la frontera. In 2013, the television detective series Cadáver se necesita based on his novel of the same name was one of four finalists for the International Emmy Awards.