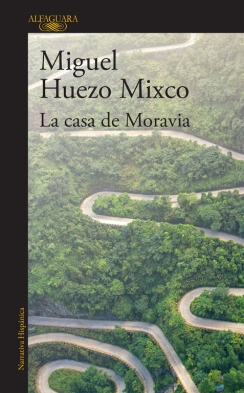 1981. In Central America, war is raging on all sides. A young man dreaming of changing the world is given a mission to bring supplies and medication from Costa Rica to Nicaragua, a country that is resisting both the economic bloc and attacks from armed gangs.

His base of operations is in a neighborhood of San José, where a cell is trying to launch an illegal radio station to support an armed uprising in El Salvador.

But not everything is about the armed effort, because, away from prying eyes and without making a big noise, a sexual revolution is underway that will change the protagonist’s lives.

A road novel where the constant dangers and exuberant landscapes of the region are the backdrop for the invocation of a collective memory crippled by violence, falsification and loss.

With The Moravia House, Miguel Huezo Mixco returns once more to these years of uncertainty, where people of flesh and bone, vulnerable and imperfect, risked their lives in the hope of leaving behind a better country. It’s not about identifying the heroes or the villains: because there are no innocent people who participate in war.

EL SALVADOR – Miguel Huezo Mixco (El Salvador, 1954) is a poet, essayist and editor. He had his narrative debut in 2014 with Camino de hormigas (Alfaguara). As an ex-fighter in one of the Salvadorian guerrilla groups, he is now one of the most prestigious intellectuals of Central America.