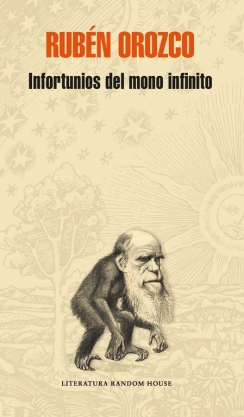 Rubén Orozco
The Misfortunes of the Infinite Monkey

A man loses his memory when his wife, in a fit of jealousy, castrates him; leaving him with no past, and thus no future. Lucid, profound, witty and comic.   The man has no memories of his life up to that point, not even of the traumatic episode. Determined to figure out his past—after various failed attempts—he enlists the help of P.G. Spiegel, an eighty-year-old psychologist who devoted his career to studying various disorders, and who manages to discover the tragic event that caused the amnesia.   Their doctor-patient relationship is an attempt to understand each of their stories. Spiegel is an Auschwitz survivor who transformed fears—his own and others’—into the axis of his career. The castrated man lives in anguish as he faces the difficulty of enjoying his present and his future without a past, so he writes a book in order to leave a legacy.

Rubén Orozco ( Colombia, 1982) is a writer and a translator. His first novel, Los tempestuosos, was published in 2011. He currently lives in Medellín.