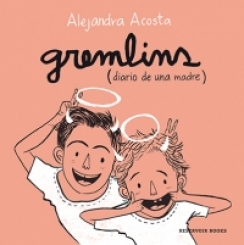 This illustrated journey by Alejandra Acosta —one of Chile’s finest illustrators— takes on the ambitious task of reproducing in images the relationship between a mother and her two young children. Gremlins is a sensitive and subtle autobiographical book that reveals how those mundane moments in family life can also become heroic exploits.

Alejandra Acosta is a well-known Chilean illustrator. Former art director at the magazines Elle and Lat.33, she is also a contributor to magazines in Spain, Mexico and Colombia, and has taken part in group exhibitions in Chile and Spain. Over the years she has worked on more than ten books and won several prizes, including the Hummingbird Medal awarded by IBBY Chile, in 2012  and 2013.