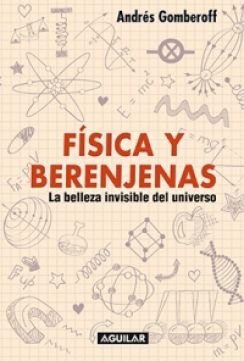 Through exciting short accounts and everyday anecdotes, Gomberoff amazes us his with simple explanations of everything from the parallel universe theory to the mysteries of antimatter. Following in the path of some of his idols like Carl Sagan and Stephen Hawkings, he manages to explain some of the great phenomena and mysteries of the universe in a clear and entertaining way. From Marconi to Einstein and Woody Allen to Mussolini, stopping by the Beatles and Olivia Newton John, he creates an illuminating work of scientific revelations but also a well-written, funny, and above-all entertaining book.

“I don’t know why science is not very attractive and even intimidating for some people. Though I have a feeling that it comes from the reaction that we’ve developed ourselves because of the way it is taught and explained. Something that we can call “the aubergine effect”: most people seem not to like them, but we can’t blame the aubergine itself. It’s obviously down to people not knowing how to cook them.” Andrés Gomberoff

Andrés Gomberoff has a PhD in Physics and postdocs at the Centre for Scientific Studies in Valdivia (CECS) and Syracuse University in the US. He won the Popular Science Contest presented by Spain’s National Centre for Particle, Astroparticle and Nuclear Physics (CPAN). He is a regular contributor to the magazine Qué Pasa.