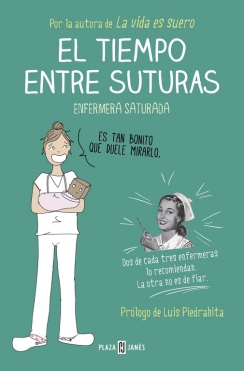 Enfermera saturada
Time in Between Stitches

Following the success of La vida es suero, which sold 40,000 copies, Enfermera Saturada is back with many more stories of daily life in the public hospital system. After winning over thousands of readers with her particular take on hospitals and the medical world, with this second book Enfermera Saturada, nicknamed "Satu", again opens up a door onto the backstage scene in nursing. From bandages with cartoon characters printed on them, to road trips to take public exams for a permanent position, nothing escapes the nurse who spends her days tweeting from hospital hallways.

Enfermera Saturada defines herself as a Spanish nurse searching for her niche in the medical world. Her shifts begin in the ward, she goes down to the ICU, then up to the premature babies before ending in the E.R. This nurse knows her way around social media, where every day tens of thousands of people check in to see her cheeky, hilarious reports from the hospital, which could be any modern hospital around the world.