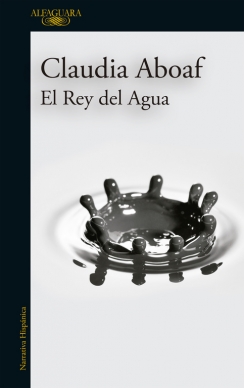 Two sisters, Juana and Andrea, who have grown apart because of their history, are notified about the discovery of the remains of their father, who had disappeared during the dictatorship. But what is found in the river water is not his body but his DNA. We are now in “the Liquid Territory”, a delta of the Tiger River where in the near future the sale of raw water and the river cemeteries means they are now the Water King’s business. This new governor is making use of technology to purify this liquid gold and export it to countries where there are droughts on the horizon.

The disagreements between the two sisters increase as the story progresses. Juana works for a website treating patients on the other side of the world from her computer screen. She is tempted by the dark web and its illegal offers on forums where your mind can get trapped, leaving your body abandoned in front of the monitor. Andrea provisionally lives in the island house where their father hid and responds to the call of the governor who is anxious to use compensation for citizens affected to improve his image. Both Juana and Andrea will find themselves caught up in the trap of an old lawyer’s scam.

“As admirable as the balanced symmetries and asymmetries of this novel, are the aspects of its bravely contemporary plot. The ebbs, flows and general rhythm of the river, “the strong brown god” as T.S Eliot once said, are present throughout. They are as intriguing as the unpredictable prose of Claudia Aboaf, who to make herself heard does not need anything other than this story, which protects fiction from any trace of unreality.”  Luis Chitarroni

ARGENTINA – Claudia Aboaf is a writer and the granddaughter of Ulyses Petit de Urat. For years she dedicated herself to astrology and then to successful gastronomic enterprises such as the Museo Evita restaurant. She is the author of three novels: Medio grado de libertad (2003), Pichonas (2014) and El Rey del Agua (2017).