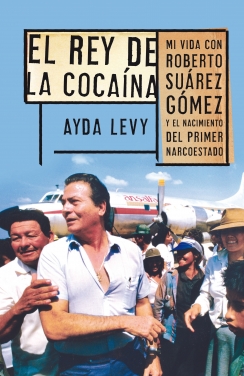 Ayda Levy
The King Of Cocaine

EL REY DE LA COCAÍNA tells the story of Roberto Suarez who, by being considered the most important drug producer in the 80’s, has earned the title King of Cocaine. Written by Suarez’s widow, along with one of their sons, this book describes how he became the supplier for the world’s major drug dealers, including Pablo Escobar’s Medellin cartel. Although separated in the 80’s, they remained close until Suarez’s death.   Ayda, using her great, powerful and passionate voice, narrates her very own intimate story. She transmits her pain and frustration about the life her once beloved husband chose to lead as well as their sons’ involvement in the drug business. Her lack of objectivity has been very well balanced by the thorough recollection of newspaper and magazine articles which precedes each chapter.   EL REY DE LA COCAÍNA paints a portrait of the years when Suarez was at the helm of drug trafficking. As Suarez was not an average drug kingpin, the story deepens on the drug trade business, its corrupted linkage to politics and the degree in which drugs and governments interact. Suarez, as an atypical narco, was a patriot and a somehow reluctant drug lord.   Suarez’s life story is enriched by incredible revelations and by an astonishing parade of characters; among them Roberto Calvi, head of the Banca Ambrosiana, who was responsible for the scandal that engulfed the Vatican. There is also Klaus Altmann, or as we learn later, Klaus Barbie, a notorious Nazi war criminal that ended up as a security consultant to various Latin American dictatorships. Other well know characters are Pablo Escobar and Gonzalo Rodriguez Gacha, heads of the Medellin cartel; some members of the Italian mafia; Oliver North, who was allegedly involved with the Bolivian and Colombian cartels to secure financing for his operations; Fidel and Raul Castro, who received one million dollars a month, during 16 months, for the use of Cuban ports as staging bases for drug shipments, a kidnapping from Switzerland and the illegal extradition of one of Suarez’s sons.

BOLIVIA – Ayda Levy (Riberalta, Bolivia, 1934) administered her husband’s cattle businesses for 23 years until their separation, right after she found out her husband and sons’ involvement in the drug business. Her lack of objectivity has been very well balanced by a thorough recollection of newspaper and magazine articles.