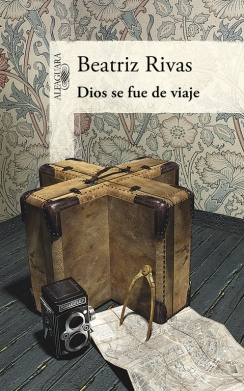 There are no ties between Émilie du Châtelet and Gerda Taro, except that they are both fierce defenders of their own freedom, and they love and allow themselves to be loved passionately. The only link between the two is a letter written in 1749. Dios se fue de viaje tells the story of the exodus of four lovers who one day opened their eyes and discovered that right after God created the world, he packed his bag and went travelling, perhaps never to return. He left behind a world of inequalities, prejudices and weapons that keep human beings from living happily, as they fail to understand that the place to find God nowadays is in acquiring knowledge and in the struggle for ideals such as freedom and enduring love.

In little over a decade, Beatriz Rivas has been acknowledged as one of the most recognized Mexican women writing today. Alfaguara has also published her novels La hora sin diosas, Viento amargo, Todas mis vidas posibles, Amores adúlteros and Amores adúlteros… el final.