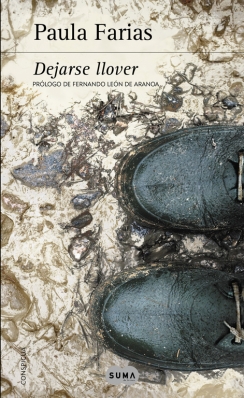 In the devastating landscape of war, a group of volunteer workers in a Peaceful Transition Brigade are doing everything they can to get a decomposing corpse out of a well. The life of an entire town depends on the success of their mission. Their drinking water —their life source— is literally impregnated with rotting death. The longer the volunteers struggle with their task, the more desperate and anxious they become, while the main character is haunted by memories of refugee camps, war and murders. Paula Farias delicately constructs a kaleidoscope of insidious, silent war; and, in her poetic style, she describes the feeling of living each day with fear breathing down your neck. Dejarse llover inspired the film A Perfect Day, directed by Fernando León de Aranoa, which was acclaimed by the critics at Cannes festival 2015.

Since 1999 she has formed part of the NGO Doctors Without Borders, working on the front line of numerous catastrophes, emergencies and violent conflicts. In 2004 she published the children’s book Déjate contar un cuento, based on her experiences as a humanitarian aid worker.