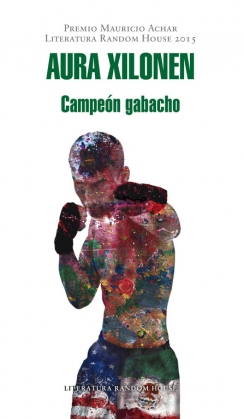 With a wonderful language, which, in the words of Cristina Rivera Garza, instead of being classified as Spanglish it could be classified as “ingleñol,” this very young author reveals the adventures of an endearing character named Liborio.

Liborio is a Mexican young man, a mojado who crossed the Río Bravo and moved to the US in search of a better future. Liborio had to leave Mexico because, as he says, "in Mexico you only have ‘putizas’ to survive. That's why I came here, because I was fed up with wiping my nose in the dust; biting the bowels ofthe earth" and he crosses, like many others,the Río Bravo to reach "the promised land."

In a southern US latino neighbourhood this character will face his own transformation: from being a slang ingleñol user with a natural talent for boxing, to becoming a man who was able to transcend his social background, use his work experience at a bookshop to his own advantage, and mold his language and mind to become a professional boxer in the US. He feds his erotic fantasies watching the morras walking the streets while he works in the bookshop. And that is where, almost by chance, he meets a girl he already fantasizes that becomes the reason for his existence. Then, his story will give a twist: he will become a boxer.

Liborio’s love story with the local girl is a leading thread throughout this powerful narrative, where besides reading the love letters written by the protagonist to his beloved girl, the reader will encounter a display of the social problems faced by migrants, their solitude and fear, but also the light they have the chance to find once they have the strength to cross the border and overcome great challenges. Thanks to the memories and the voice of Liborio, we accompany him to cross the border illegally and to understand how the environment shines before his eyes with all the luxury that only accesses through remote viewing.

The novel dazzles us with a language that shows, in turn, strength and fascination. Aura Xilonen masterfully describes the world of immigrants and their daily lives, but at the same time she covers the world of boxing.

Campeón Gabacho will be appreciated by readers of literary quality, by those interested in the world of boxing ant immigration issues.  Readers outside the usual literary circle will be interested too because of the author’s youth.

Her literary debut, Campeón gabacho, was awarded the Literatura Random House Premio Mauricio Achar, 2015. In 2015, Xilonen won the second-place prize from the Autonomous University of Puebla for a short film, and first place for best original screenplay, Celaghdki, from the University Cultural Complex.