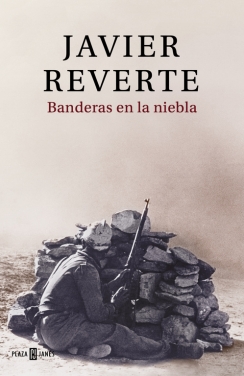 Javier Reverte
Flags in the Mist

Javier Reverte narrates, with real skill and without oversimplification, the drama of the Spanish Civil War through two real-life stories. The author has transformed them into a novel to give verisimilitude to a story whose events are sometimes forgotten.

December 1936. Spain burns in the flames of a fierce war where victory has not yet been secured and towns and households are fighting against each other. Without knowing anything about the other, two men from very different backgrounds share the same fate: a bloody battle on the Jaén mountains of Lopero, where destiny will link their two names forever.

José García Carranza, The Algaban, is a Sevillian bullfighter, womanizer and Falangist who joins the rebels at the first opportunity and actively participates in the repression of the Andalusian town in the face of horsemen from the extreme right. John Cornford, a student and communist from the University of Cambridge and the great grandson of Charles Darwin, is a young poet motivated by his romantic spirit who, under full Stalinism, becomes one of the first volunteers to enlist in the International Brigades.

This portrayal of their biographies, masterfully crafted by Javier Reverte, shows us two sides of the epic war: one of a Spain drowned in the values of the past; and the other of young people who, buoyed by revolutionary ideals, came to Spain to fight.

“There are some men who feel an attraction to death, perhaps because they understand that it is part of human nature, because of which they cannot control their lives. Maybe this is the reason they happily go to war, ready to kill and to die. But the young find out too late that it is the old who plan the wars and it is them, who, in the end, will die on the battle fields.”

SPAIN – Javier Reverte (Madrid, 1944) is, as well as being one of the best Spanish travel writers, a renowned novelist and pet. He has lived in London, Paris, Lisbon, New York and Westport (Ireland) and currently spends most of his time in a small town in the Guadarrama Mountains near Madrid. He has published travel memoirs as well as successful novels. His last work of fiction, El tiempo de los héroes, was the first time he addressed the Spanish Civil War.